I am the mom who makes my kids wear lifejackets when we stand on the riverbanks to fish. When camping by a lake, my children put on lifejackets before breakfast and wear them all day. And yet, against all maternal instinct, I went sans lifejacket on Episode 7 of “WANTED: Adventure Host.” As one of six final contestants vying for a hosting job of an outdoor show, I found myself competing in a mega, mini-triathlon along the banks of the Deschutes River in Central Oregon without so much as a water-wing!

The pre-race prep was less than inspirational. “As soon as you hit the water you will be hypothermic,” warns judge Brian “Tracker” Wheeler. The producers added, “Make sure you jump out far enough to avoid the rocks below.” Oh great!

Being the only female in group of men that include a college athlete, two professional athletes, a rock climber and muscle-bound fireman, I just knew that I would come in last place. My only chance was to gut it out and try not to look like a wimp. That meant my old friend, the life jacket, was out no matter how I longed for it’s reassuring embrace.

Ready, set, go! I started the uphill run on a jagged trail to a 30-foot cliff over looking the frigid Deschutes River. When I came to the cliff, I stopped and tried to catch my breath before hitting the icy water. Mustering some courage, I took a jog to the edge only to stop short doubting my footing, doubting whether I would clear the rocks below, doubting whether I would live!

Second attempt, I made it off the cliff only find the cold water hit me just as hard as I imaged the rocks would. The 40 degree water sat on my chest like an anvil – I could not breath!

Now don’t get me wrong, I have excitedly jumped into Alaskan lakes that still have ice on them. This was worse! When out of breath from running in high altitudes, fighting with fresh melted ice is not a battle I would choose. But that day, girl guts won! I made it to the riverbank.

Unable to feel my fingers, I now had to grip handlebars and navigate a mountain bike through boulders, rocks, and roots to the finish line. With slippery wet shoes and limbs like noodles, it is a miracle I stayed on that bike!

Looking back, I am glad that I decided before the race started that I was not going to use the lifejacket. Knowing that I would not be as fast as the men, taking a two-minute penalty for the security of the jacket would have been an automatic concession. Having already made-up my mind, when I stood facing down the cliff, scared as I was, the lifejacket didn’t even cross my mind.

Now, when I find myself re-evaluating decisions based on fear and doubt, I can remind myself that even though fear is here now, and pain will most likely follow, there will be a finish line. I want to celebrate at that finish line knowing I followed the plan. Even when I am scared, I want to have faith and jump.

2 Timothy 4: 7-8 “I have finished the race, I have kept the faith. Now there is in store for me the crown of righteousness, which the Lord, the righteous Judge, will award to me on that day.”


QUINOA TRI-FECTION PERFECTION
Quinoa is the king of grains! Not only is it a fiber filled whole grain, but quinoa is also the highest protein plant food! All that muscle building goodness without the animal fats and messy preparation. Quinoa has an almost rice-like flavor, which easily takes on the flavors of added ingredients and spices. And its texture is similar to cous cous, a small granular pasta. Like pasta, quinoa is also a carb making it the perfect pre-race food – just what the “WANTED: Adventure Host” contestants needed before the mini-triathlon in Episode 7! So in honor of the mega mini-tri, I give you Quinoa three ways!

Directions
Place both water and quinoa into a saucepan. Bring to a rolling boil then reduce heat, cover and simmer till quinoa is slightly translucent and tender (about 15 minutes). When there are steam wholes on the surface of the quinoa, it is usually done. 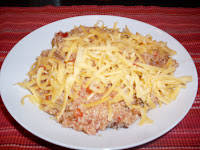 Directions
Prepare Basic Quinoa. When steam holes appear on surface of quinoa, fold in salsa. Try to work the quinoa as little as possible to keep it from getting starchy and gummy. Serve topped with cheese as a side or double the recipe for entrée sized portions.

2. Add broth and quinoa. Bring to a boil. Reduce heat, cover and simmer about 15 minutes or until steam holes are seen on the surface of quinoa and grains are semi-translucent and tender. Serve top with a sprinkling of green onions, grape tomatoes, salt and pepper.

Directions
1. Prepare Basic Quinoa. In the meantime, mix dressing. Combine oil, vinegar, water, agave nectar, and mustard. When Basic Quinoa is ready, top with dressing, fluff (working the quinoa as little as possible)
2. When ready to serve, place spinach in a large dish. Top with quinoa, toss together and top with pistachios.

Question? Comment? Tried the recipe? Let me know what you think. Leave a comment!
Posted by Lindsey @ FRESH AIR + FRESH FOOD at 7:55 AM