What is with America’s fascination with gun? What is wrong with us . . . NOTHING! Okay, maybe something is wrong, I hate to go all absolute, but I have joined the gun lovin’ crowd!

I admit, I was one of those girls who rolled her eyes when people started talking about the thrill of shooting a gun. “If people are so repressed that they have to shoot a gun to release stress then what they really need is a shrink,” may have been something I’ve said . . . in the past. Now I get it!

Hearing the “Ting” of a bullet on a metal plate at the rifle range on episode 6 of “WANTED: Adventure Host” sent a charge through my whole body – the same charge I felt as I held a rifle to my shoulder that hot day at the Redmond Rod and Gun Club.

There is something about silence, slow exhale, then decisive action that punches you back, fills your nostrils with smoke, and rings in your ears.

And if that isn’t enough, assign a point value! I’ve always known that I’m a competitive person, but now I feel it deep in my core, with the bruised shoulder to prove it!

Just like running long distances, not to actually get anywhere, but to cross an arbitrary finish line. So is shooting a gun not to kill dinner, but to see if you can hit more targets than the next guy. I like to win! Everyone likes to feel good at something, right? Especially Americans!

Olympic gold medal counts. “Be all you can be!” First to put a man on the moon. We are a country that likes to compete and loves to win. And what’s more, we are a country that loves instant gratification, a buy now pay later nation. When you shoot a gun, the butt of the rifle either gives you an immediate high five or kicks you right in the shoulder – instant gratification. There is a reason Emeril says, “Bam!”

Having never shot a gun before, beating two experienced target shooters (and Brent), to come in 5th out of eight, I am pretty proud of myself! I’ve never felt more American. I might just join the NRA. 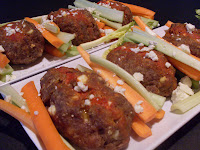 Quick and easy – these buffalo flavored mini meatloafs carry some kick just like a rifle at Redmond Rod and Gun Club! When shootin’ guns and riding horses you gotta have something wild and western to end your day. With lean, high protein bison you can be kind to your heart and enjoy your meat!

Form 6 to 8 individual loaves with a well on top to hold hot sauce. Arrange on lightly greased baking sheet and drizzle each with ½ tbsp of red pepper sauce. 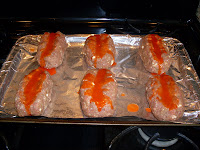 Bake for 45 to 55 minutes. Garnish with remaining bleu cheese and serve with carrot and celery sticks and red pepper sauce.