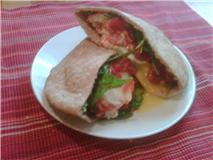 Arugula, otherwise known as rocket in markets across the pond according to Jaime Oliver, looks a lot like spinach but with a less sweet, earthier, peppery flavor. Needless to say, in a country that has spent years slowly moving beyond entry level lettuces like iceberg (nothing against iceberg) to slightly more flavorful romaine, pungent arugula is not the most popular of greens. Some may find an entire rocket salad slightly overwhelming and bitter. However, with a little warmth, vinaigrette, sweet tomato and creamy egg, arugula stands up beautifully where other greens may get too wilty, slimy, or “green” tasting, like the smell of old spinach.

So thanks Heidi for suggesting arugula for Try it Tuesday. I don’t eat arugula very often, mostly because I’m in love with spinach from my garden and don’t eat salads as much in the winter.

Still, I’m familiar with arugula and assumed that I could just pick it up at the grocery store whenever. Imagine my surprise when the two mainstream markets in town had no arugula to speak of.

Roth’s Fresh Market was willing to send out for some rocket and have it tomorrw – they know a guy. But since it’s Try it Tuesday, not Why Not Wednesday, I checked one more store, mostly to get free cookies for the kids.

Eureka! Rocket Pocket is a go! Great for lunch but even better for a breakfast on the go. If you’re careful not to overstuff the pita, effectively splitting the seams, the pocket will catch the yolk for a great self contained breakfast that won’t spill on your shirt when you drive to work. For extra insurance, wrap in foil or waxed paper and peel away as you eat.

Directions
1. Place can of tomatoes in small/medium skillet with a lid. Create four wells in the tomatoes with the back of a spoon. Crack one egg in each well. Turn heat to medium and cover, poaching eggs in the simmering tomatoes. Keep a careful watch on eggs and remove with a spoon when yolks reach desired degree of doneness (test by gently poking the yolk with your finger).
2. Meanwhile, whisk together juice from half a lemon, oil, vinegar, mustard, agave, salt and pepper in a large bowl. Place arugula in bowl and toss with vinaigrette.
3. To assemble pockets, stuff each pita with arugula making sure to create room in the middle of the leaves to place eggs and spoonful of tomatoes. Repeat with each pita.

Variations: Add skillet potatoes or diced potatoes if you have some leftover from a previous meal. I’ve added a strip of turkey bacon on mornings when I have a little more time. If you don’t have pita pockets, no biggie, simply layer on top of thick toast. Or leave out bread entirely for a hearty salad. Great for the lunch box if you keep egg and tomatoes, vinaigrette, and rocket separate until you’re ready to eat.
Posted by Lindsey @ FRESH AIR + FRESH FOOD at 2:20 PM