It has been a while since I went on a meat run – I mean salmon fishing. Every summer, I would go with my family and salmon fish on the Willow River in Alaska. Spending a week or two during the peak time of the run, limiting out every single day. That’s three huge salmon apiece.

Filleted, rinsed in the river, bagged up, and packed away, my Dad would heft the 25 to 40 pounds of fish over a mile of rough, muddy, over-grown trail.

We would emerge from the woods into the parking lot where the RVs sat. Eager people would ask, “How’d you do?” We just threw up our hands and my Dad would shake his head. The more we could discourage people, the more river we would have all to ourselves.

Never in my life have I proudly displayed a fish. I was taught that a real fisherman hid her fish away and disappeared quietly into the wood while the chumps on the main beach scream “Fish On!” loud enough for their buddies back home to hear, just before they loose it in the current.

After a few days of reeling in our limit, hefting mounds of meat, and shaking our heads in feigned disappointment through the parking lot, we had enough fish to fill my freezer as well as my parent’s and sister’s.

And when I say fill, I mean stuff. It’s salmon dinner at least two nights a week or you’re not going to get through it in a year. This year, we weren’t able to get that many Fish Fridays in. The salmon I’m thawing now is looking a little freezer burned and needs a lot of trimming before I cook it up. Not willing to throw out my memories, I refuse to trash sub-prime fish. That means it’s salmon cake time.

Having grown-up on either lemon pepper salmon fillets or salmon cakes, I decided I needed to branch out a bit. So I developed lots of flaked salmon recipes, which can also take canned salmon for those of you who may sit in parking lots asking, “Are the fish biting?” while a disappointed family with an unusually heavy backpack walks by.

I tested my latest flaked salmon creation at my birthday this past week where it was a big hit - Salmon and Roasted Corn Panzanella dressed with my go-to Balsamic Vinegarette. Panzanella is simply a salad with a generous amount of old bread thrown in – a great way to use sub-prime bread.

I thought of calling this recipe Old Food Salad or Don’t Trash It, Serve It To Your In-Laws (which is exactly what I did), but I thought that might be a little confusing. After all, the tomatoes gotta be fresh. Although, if you use leftover corn on the cob and leave out the tomato, you’re almost exclusively dealing with salvaged food. So go ahead and call it Salvaged Salad if you are into that sort of thing.

Note: If you don’t have old bread, just toast up large cubes in the oven with salt, pepper, and olive oil. 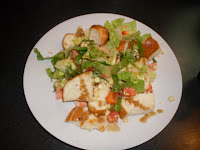 Directions
1. Preheat oven to 375 degrees. Place ears of corn on baking sheet, drizzle generously with oil, sprinkle with salt and pepper, and place in oven to roast for 15 minutes, turn and roast for 15 to 20 minutes or until brown carmalization appears on bottom of corn. Remove and let cool.
2. While corn is roasted, cube French bread into about 1 inch pieces or larger. Place on baking sheet, give it a scant drizzle of olive oil, kosher salt and pepper. Toast for 5 to 8 minutes or until bread begins to turn golden brown.
3. Prepare vinaigrette. In a jar or vinaigrette bottle, combine ¾ cup olive oil, vinegar, water, sugar, salt, garlic powder, and mustard powder. Shake vigorously to mix.
4. Once cooled, cut corn off cob. Combine lettuce, tomatoes, cucumber, basil, corn and salmon in a large bowl. Squeeze lemon over salad and toss. Just before serving, add bread and drizzle with vinaigrette.