I leave for Montana in 2.5 days. I have 2 articles to write. I have 7 fitness classes to teach. I need to send out several e-mails. My house needs cleaning and laundry needs folding. Pack! I’ve got to pack for a ten day camping trip with 6 kids ages 6 and under (not all mine). 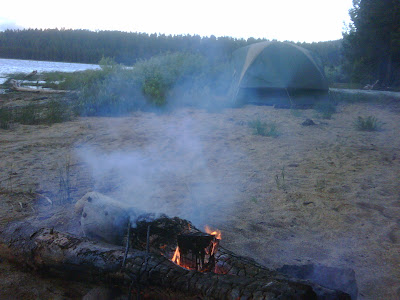 If your reaction is anything like some of the other people’s I’ve told this week well then you might have the same expression that my husband had when I told him we were having roasted jicima for dinner.

“Jicima?” he asked with definite doubt and dinner disappointment in his voice. The distress was all over his face, much like a child’s when you tell him you’re serving onions or brussel sprouts.

“Yep!” I declared. “Jicima is nicknamed ‘The Mexican Potato’ so why shouldn’t I roast it?”

Thankful, Ryan has been trained to swallow his disappointment and digest his doubt for dinner. Then when the food comes around, he is usually pleasantly surprised – so it’s like a welcome dessert.

And what do you know? I came through. Roasting jicima actually works. Whew! I had my doubts too.

I first cut the jicima in spears, like oven fries, drizzled with canola oil and sprinkled with salt and pepper, and popped it into a 425 degree oven for about 30 minutes. Voila! As soon as the tail-tale brown bubbles began to appear I pulled it out. Unlike a potato, the jicima remained crisp but not unpleasantly so, almost like perfectly blanch asparagus. Fantastic!

So now I can admit, I was not convinced that cooking jicima would work. But since Heidi challenged me by saying, “I’ve used jicima is salads but I’m interested to see what you’ll do with it,” the pressure had been mounting. Thanks a lot Heidi!

I use jicima raw too. What else is there? How can it be good any other way? So I bought a couple back-up jicimas, just in case, and went to work. Success! Relief! So really, thanks Heidi!

On another level, it’s kinda what I’m hoping will happen this week – vacation prep pressure and crazy camping trip with an uber-amount of little kids. I'm gonna go all Nike this week and just do it!

Until then, I’ve gotta finish off some leftovers, do some laundry, pack, write, teach, clean, and think about what I’m sure I’m forgetting . . .

Roasted Jicima with Peppers and Corn 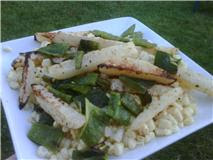 Directions
1. Heat oven to 425. Shuck corn, peel and slice jicima into long strips, slice jalapeno lengthwise, cut out ribs and seeds, and dice remaining flesh, and place all vegetables onto a baking sheet. Drizzle with a couple tbsp canola oil, sprinkle with salt and pepper, and shuffle around to coat evenly. Place baking sheet into oven for 30 – 40 minutes or until vegetables begin to grow tender and brown.
2. Meanwhile, roast poblano pepper. There are a few methods. You can place pepper over coals and turn as the skin blisters and bubbles. If you have a gas stove, you can hold over flames to roast. Other methods include broiling on the top rack of the oven before you roast the vegetables or heating in a dry pan . Once the skin is blackened and bubbled all around, cool a bit and wipe skin away with a towel. Flesh will be soft. Slice lengthwise and cut away ribs and seeds. Slice lengthwise then cut across to make about inch-sized squares.
3. Once vegetables are tender, remove from oven. Cut corn kernels away from cob. Combine roasted vegetables and poblano pepper. Serve. 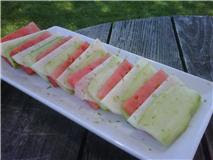 Yet another cold jicima salad. This one however invokes the fresh look of watermelon as long as you don’t peel the cucumber too deep – you want it to look a little green. Not too sweet and oh so refreshing! 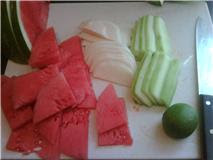 1. Slice watermelon in half through the waist. Place cut side down and slice in half again. Slice remaining fourth into thin pieces. With the tip of a knife, cut rind way from each slice and cut into fourths. Set aside.
2. Cut jicima in half, peel, and thinly slice. Set aside.
3. Peel cucumber, cut away each end, thinly slice down the length of the cucumber, then cut in half at the waist.
4. Assemble by layering watermelon, jicima, and cucumber. Zest lime over the salad as a garnish. Cut lime in half and squeeze juice over salad. Finish with a drizzle of agave nectar.

Make it into an appetizer by drizzling fruit with lime and agave, stacking cucumber at the bottom, then cucumber and watermelon. Place 3 toothpicks into the stack and cut between toothpicks. Easy Peasy!
Posted by Lindsey @ FRESH AIR + FRESH FOOD at 8:07 PM