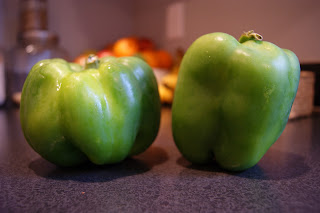 Remember that Seinfeld episode when Elaine gets Mr. Costanza to spy on the women at the nail salon who were speaking in some Asian language? The gal in the back room over-hears the voice of her ex-lover, Frank Costanza, scolding . . . nay . . . chewing out the nail technicians who were insulting their English speaking clients. Ah, what a lovely reunion. They reminisce about their relationship from long ago, which eventually leads them to why they broke up . . . Foot Odor.
Frank Costanza refused to take off his shoes due to foot funk and lost the love of his youth.
After reading through a women's magazine that suggested swiping antiperspirant on the bottoms of your feet before working out, I laughed out loud. The gal on the stationary bike next to me at the gym gave me a funny look. I knew she saw me, but I couldn't help looking at her feet wondering if her toes were slathered with chemically-pore-plugging pit-rub.
Can you sense my disdain for antiperspirant? Sweating is healthy! Why would you want shut off a natural purification process? Unless of course your sweat wreaks.
NEWS FLASH: Your sweat doesn't have to stink!* Seriously!
I have really sensitive skin and can't wear antiperspirant without getting a rash. So how do I fight the funk? GREEN BELL PEPPERS! You can eliminate smelly feet, stinky pits, and actually freshen your breath by eating this wonder fruit.
They are so juicy and crisp at the same time and so fresh tasting, much like an apple. Therefore, I often eat them just like an apple, grab and bite it! I avoid the seeds in the middle like I would the core of an apple.
Bell peppers are one of the few vegetable that you can just pick up off the produce rack, rinse and eat - no cutting, peeling, or cooking necessary. Perfect fast food aka something you just stuff in your purse for later that day without forethought.
Bell peppers also lend themselves to fun feasting due to their fantastic hollow cup shape - my children's favorite feature.
While trying to make vegetable fun one day, I . . . 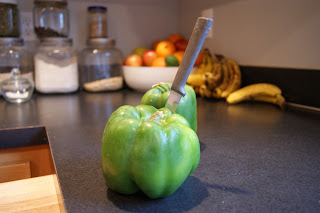 1. cut the top off a pepper
2. pulled out the seeds
3. filled it with water 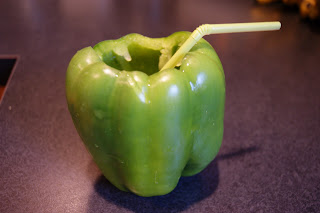 4. dropped in a straw

and gave it to my 2-year-old Jo. I made one for myself too. After drinking the water I gave the cup a good chomp and my surprised toddler burst with laughter and followed suit.
We called them Pepper Cups and they've been a favorite of my kids ever since. 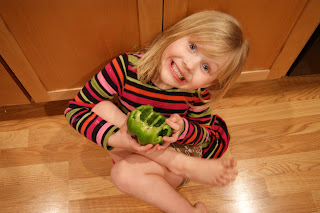 My little ones prefer red bell peppers since they are so much sweeter.  Still, they'll eat either and their arm pits smell oh so sweet! 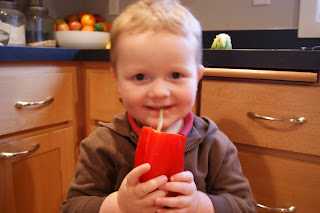 However, if you are serious about battling B.O. go green.
*Dirty Disclaimer: No amount of green peppers will fight the bacterial stink that will grow from sweat that's allowed to stick around on your warm body for an extended length of time. So take a shower people!